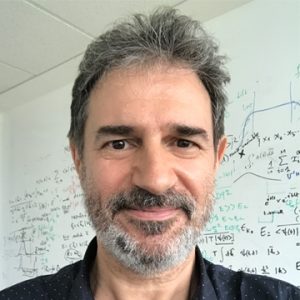 On Thursday 27th May 2021, Christian Miniatura, Director of the International Research Laboratory MajuLab and visiting research Professor for the Centre for Quantum Technologies at NUS since 2008, shared his passion for quantum technology by setting the scene and painting the historical evolution of the two major eras of quantum.

Please click on the below to watch the replay of Christian Miniatura’s After Lab recording:

“Quantum physics is the theory that underlies the fundamental properties of Nature. It arose gradually at the turn of the 20th century to explain experimental observations which could not be reconciled with the existing prevailing (classical) physical theories of the times: black-body radiation problem, photoelectric effect, etc. These early attempts to understand microscopic phenomena, now known as the “old quantum theory”, led to the full development of the theoretical body and fundamental concepts of quantum mechanics in the mid-1920s. With it came a technology Era dubbed Quantum 1.0 where important advances like the transistor, semiconductors, computers devices or the laser (to cite a few) were developed and changed our societies.

During my talk I will speak about these 2 quantum technology Eras and I will present MajuLab, an IRL pooling CNRS, UCA, SU, NUS and NTU and formally created in 2014 on a collaboration started in 2008 with the Centre for Quantum Technologies of Singapore.”

Hi! I am the new scientific and higher education officer at the French Embassy in Singapore. Looking forward to meeting you and giving you the best French Lab experience!