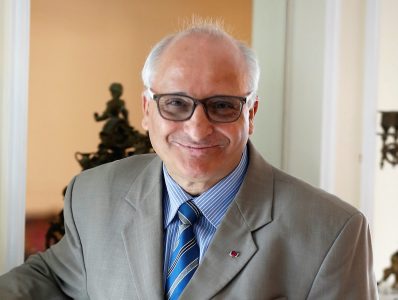 On Thursday 3 December 2020, well-known Professor Rachid Yazami has presented the sixth French Lab Singapore meeting of the year: AFTER LAB!

In 2010, Dr. Yazami joined the Nanyang Technological University in Singapore (NTU) where he held the Nanyang Visiting Professor in Materials Science position together with being a PI of battery research at the TUM Create Center of e-mobility, jointly managed by NTU and the Technological University of Munich. In recognition of his invention of the graphite anode in lithium ion batteries, Yazami received several scientific awards, including from NASA, NATO, IBA, JSPS, Hawaii Battery Conference, the IEEE and the Draper Prize in 2014 considered as the Nobel Prize in Engineering. In 2014 Yazami was decorated by HM the King of Morocco. He is the recipient of the French Legion of Honor in 2016 and of the “2018’ Takreem Award” in Science and Technology Innovation, considered the Arab Scientist of the Year Award. Recently Prof. Rachid was the recipient of the 2019’ Arab Investor Award during a Forum held in the UNESCO headquarters in Paris together with the Mohamed Bin Rached Medal of Scientific Distinguishment of Life Achievement given by the Ruler of Dubai in 2020.

Lithium ion batteries (LIB) are widely used in mobile electronics systems and are expected to play an increasing role in the transportation evolution from current internal combustion vehicles (ICV) to electric vehicles (EV).

One bottleneck of the EV market acceptance is the fast charging. The best available technologies cannot fully charge an EV battery pack (from 0 to 100%) in less than 60 minutes because of inherent adverse effect such as overheating and battery life shortening. A battery pack in an EV accounts for over 30% of the total cost. Therefore, a battery pack should last at least 8 years and provide multi-hundred thousand of driving kilometers before considering to replace it. Today fast charging and lifespan, which are required by the EV users seem to pose a dilemma to the EV industry.

By analysing the current battery charging methods to find out their limitations, we came to the conclusion that there is a need to reconsider the over one century old techniques based on applying a constant charging current and monitoring the voltage to innovate and perhaps revolutionize the battery charging protocols. We developed new adaptive/natural charging methods using a communication bus between the charger and the battery. In our protocol we do not impose any constant current/voltage to the cell. Rather, we leave the battery respond naturally to an increase in voltage at naturally varying rates. We coined the protocol under the name “non-linear voltammetry” (NLV). NLV enables to fully charge a battery for EV application below 20 minutes, which we believe is a world record. During the NLV charging the cell temperature under ambient temperature air cooling never exceeded 45C to be compared to 50C reached after only 5 min charging with the Tesla V3 250kW Supercharger.

This webinar has covered the most commonly used charging protocols and has introduced the NLV through laboratory tests results performed on LIB of different form factors designed for a wide variety of applications.

The recording link will be disseminated later on this post.